Press release - Meeting with a "transition class" for refugees

At the beginning of this year, we introduced the Erasmus+ Project “Journeys of Hope” at the Stiftsgymnasium St. Paul.

In order to get ready for the second student exchange in Naples, Italy, a few pupils had to analyse the refugee crisis, its main reasons and consequences.
As a preparation, the pupils had the chance to visit the first immigration class for refugees at the WI'MO Klagenfurt. 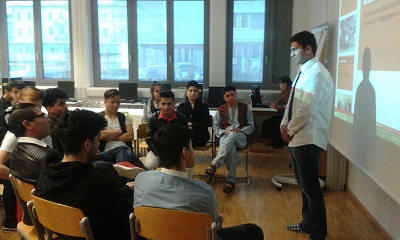 Currently, about 20 refugees from Afghanistan, Iran and Syria take lessons there. Dipl – Päd. Heidelinde Cas – Brunner and her team teach them German, as well as European culture. Moreover they prepare the refugees for their continuation in a secondary school. The pupils of the Stiftsgymnasium St. Paul were very shocked about the stories of the mostly unaccompanied teenagers (all pupils in the integration class are younger than 20 years).
Especially, the play “Azadi”, in which the refugees outlined the main reasons for their escape as well as the experiences on their journey to Austria, was really heart touching.

Afterwards, all of our students had the chance to interview the headmaster of the WIMO, as well as the actors of the play and other refugees.

Anna - Maria Grassler told us:
"I was particularly moved by the stories of their escape as well as the scenes presented in the theatre play, since until that moment I had only been an outsider. Until then I had only informed myself very little about the refugee crisis. That day I realized how much pain teenagers of my age have already been through. I was also fascinated by the fact that the refugee class was so open-minded and keen on sharing their experiences with us."