Saturday 14th of January
Today was the day of the arrival of the Italian and Spanish teams. First came the Italians. We picked them up from our school at 1.00 p.m. and we took them to our homes. The Spanish students came at around 5p.m. All students, Greeks and foreigners, met for the first time all together at 9 p.m. We went to a café to get to know each other. Even if the travelers were tired, we had such a good mood that we stayed there till 12.30 a.m. 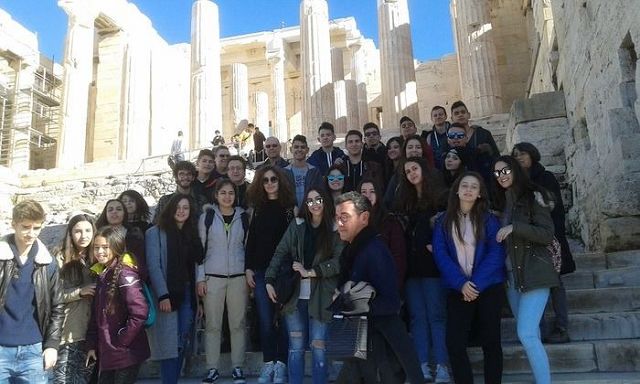 After a tour in Plaka (old town) we went at a restaurant for dinner. Later we walked down to Monastiraki square and our guests bought some souvenirs. In the afternoon, the whole Erasmus group went out for coffee. Later some of us went to Greek student’s house and had a party there till late.

Monday 16th of January
On the first day of school, the students gathered at 4th High School of Ilion at 9:00 A.M. in order to do some icebreaking activities, such as singing and dancing some Greek traditional songs.
Afterwards, we were split into two groups to attend a lesson about the ‘History of Immigration’, during which the students learnt new words and their meaning about the topic of immigration. At the end of the lesson the students played a quiz game ‘Kahoot’ about what they had studied during the presentation. At around 2:00 P.M., all the students reached their homes in order to have lunch and rest after a long day of learning and get ready to see a movie at school.
At 5:30 P.M.  back at school, where we watched the French movie ‘Welcome’. Is the story of Bilal, a 17 year-old-boy from Iraq, who sets off on an adventure-filled journey  across Europe. His purpose is to reach England,  where the woman he loves lived. At the end of the movie there was a short discussion about the movie and its meaning. After the discussion, the Erasmus students were introduced to some ‘foreign’ students  that  study in 4th High Scholl of Ilion, one whose parents are from Egypt and one who was born in Poland. They  talked about their experiences as foreigners and the differences between the cultures and lifestyles of their countries of origin and Greece.
At the end of the day, all of the Erasmus students went out to eat traditional souvlaki and to learn more about each others’ cultures, especially about their cuisines.

Tuesday 17th of January
On the fourth day, we came to school at 9:00, tired from the day before. We all went to the computer lab for Mr. Ninos’s lesson. We read a poem about immigration and discussed it. The interesting part was when a girl from each country (Italy, Spain, Greece) read the poem in their mother tongue. In the second part of the lesson we saw some photos related to the theme of the poem. The photos were very sad and made us realize the tragedy of the issue. After a break we listened to a song in Griko, a Greek dialect of South Italy. At the end of these activities we separated into two groups. The teachers told us to close our eyes and listen to four different kinds of songs, focusing on the emotions we felt hearing them. Furthermore we had to present our own way the feelings of immigrants, performing a small act to the rest of the groups. Lastly, each person expressed the meaning-message he received from these experiences, on a paper with a drawing or by writing some notes. These sheets of paper were put on the wall. After the “hard work”, we had some free time to relax and so, we spent it playing Italian games with cards. Again we had a party till 1.30 a.m. at the Greek students’ house.
Like the other days of this week, Tuesday was tiring, but at the same time very interesting and amusing.

Wednesday 18th of January
On Wednesday we had an all-day excursion to Nafplio.  The first stop was at the Corinth Canal. In Nafplio, first we went sightseeing, starting from Palamidi which is an old castle, on the top of a hill. 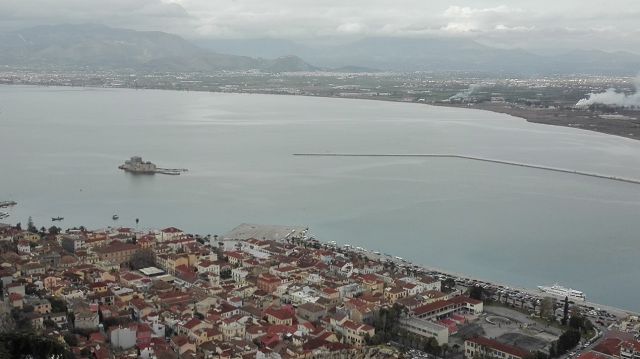 The view was fantastic. Then we had a tour in the center of the old town. It was nice but then it begun raining. All students together had launch at a local tavern and even had time for a coffee. We returned to Ilion at 19.30. From 9 pm till 1.30 am we were at a local pub having a lot of fun.

Thursday 19th of January
After we woke up we headed straight to school in order to enjoy our last day together. We all gathered in the school's auditorium where we learned more about refugees crisis. Each one of us wrote a word in a big paper which he thought it represented the whole experience best. After that, we played a game in which each country should do a living sculpture. In general we enjoyed the whole experience. After finishing this, we went to our classrooms, where we summed up our week in a few paragraphs.
On Thursday evening, we had the ''farewell party'' at the cultural center of Ilion. We listened to traditional Greek music and we saw dancers dance traditional songs from the island of Crete. The celebration took about 3 hours. We also watched a small video about the whole meeting, made by students of our school. After the end of the ceremony, all students went to a restaurant and had a great time. We ate a lot of food, and listened to music. We returned home very late, at about 2:30 am, after a very nice day.

Friday 20th of January
On Friday some of us had to get up very early, at 5.00 am, because the Spanish team had to leave for the airport very early. The rest were luckier: they had to get up at 10 am, because the Italian students could leave Ilion at 4 pm. So we all met the Italian students and had a cup of coffee with them. When we had to say “goodbye” it was a really sad moment.

It was an exciting week, with a lot of activities and fun. We made a lot of friends, had new experiences and realised what United Europe means!