Saturday/Sunday
Our Erasmus+ journey started on the 4th of March 2017. We met each other in Klagenfurt where we took the train to Rome. The train left at 23:37 and we arrived in Rome at 10 o'clock. Due to delay we had to take another train to Naples, where we arrived at about 1 o'clock. The different host families picked us up at the train station and took us to their homes, where we had lunch together. In the evening, there was a welcome party where all participants of the project from Turkey, Austria and Italy met for the first time.

Monday
On the first day at school started at 8:30 a.m. After a short introduction on the part of Emilia de Paola, the coordinator of Erasmus+ from Italy, we played a typical Neapolitan game called “Tombola”, it`s nearly the same as the game “Bingo”.
Afterwards the different countries presented their work for the 2nd Short-term exchange, which they had prepared at their school. The Turkish had interviewed someone who studied immigration - the Italian working group presented different PowerPoint presentations about countries where refugees play an important role. The students from Greece, who were not in Naples, sent us a video about the current situation on the island of Lesbos, which is only about 4 km away from the Turkish border. In this video, we saw the problems which people from the island have to face every day. Then we had some free time and we all went to the sea together - luckily the sun was shining - and afterwards we went up a small hill to the castle of Portici from where we had a beautiful view.
In the afternoon, we had a singing workshop. We sang the hymn of Europe in four different languages - it was also some kind of statement that 4 different nations, cultures and people with different religions and opinions work really well together - and in a way, that was quite fantastic. In the evening teachers and students met at a local restaurant where we enjoyed typical Neapolitan pizza – it was really delicious.

Tuesday
In the morning, a teacher of the school gave us some information about migration in ancient times and after that everyone of us had to prepare a presentation about that topic. We also had to answer the questions which had been asked before.
In the second lesson Prof. Locker and Prof. Pollanz worked with us on the current situation of immigration in different countries. Therefore, we watched a video that explained the reasons and causes why people want to leave their homes and begin to start a new life in a different country. They split us in different groups of four people, one Austrian, one Turkish and two Italians. Then each group had to give a talk in the current situation of refugees in different countries.
In the afternoon, we visited a refugee camp in Naples where we had the chance to talk with refugees from a lot of African states.
At 8 o`clock we met at Dora`s house and watched the football game Real Madrid – SC Napoli - unfortunately the Neapolitan football club lost. 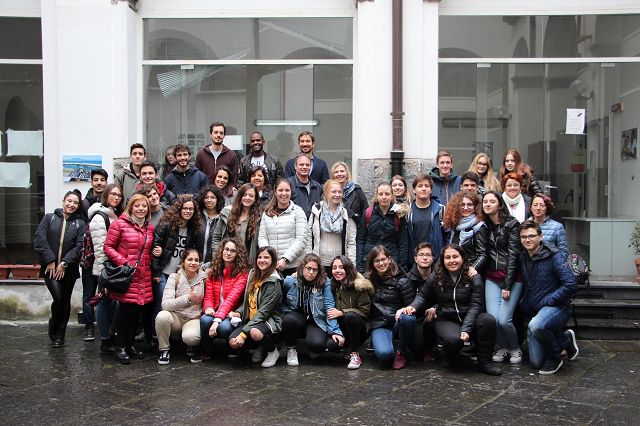 Wednesday
In the morning, we went to the Vesuvius by bus but the weather was so bad that we were not allowed to go to the top. So, we decided to visit a museum about Vesuvius and Pompeii. After lunch, we did some sightseeing in Naples – a beautiful city. On the main square of Naples our hosts showed us a common game. You are blindfolded and have to cross the square in order to reach the other side in a straight way – it`s nearly impossible. We also had the chance to see the beautiful sunset at the beach. We had dinner with our families and then we headed to a famous bar in Portici.

Thursday
At 8 o`clock we met at school and until 10 o`clock we had to prepare a short roleplay about immigrants in Naples and its surroundings. Then we worked with Prof. De Paola on foreign languages: Living conditions of immigrants in Naples. We had to translate words about that topic from English to German, Turkish and Italian.
Then the OC of the school magazine asked us some questions about our exchange program and interviewed some of us. After that we walked to nearby Herculaneum, an ancient city that was destroyed by the eruption of the volcano in 79 A.C. It was great to see how well the city has been preserved until the 21st century. Then we shortly went to our homes and prepared for the football match in the evening. It was quite a rough match. In the end the team with Alexander and Michael won against Prof. Locker, Dominik and Anna.
In the evening, we went to a restaurant near the sea with our Austrian teachers, there we stayed the whole evening and had a lot of fun.

Friday
During morning lessons, we had the opportunity to do a lot of experiments with the science teachers at the local school. We also talked about social and health issues of immigration and could experience how difficult it is to provide health care for every refugee or migrant. Luckily, we had a lot of free time in the afternoon, therefore the Austrians decided to go up to Vesuvius again and this time it was possible to reach the top. In the evening, we presented the work of this week and our preparations we had done at home to parents, teachers and the headmaster of the school. 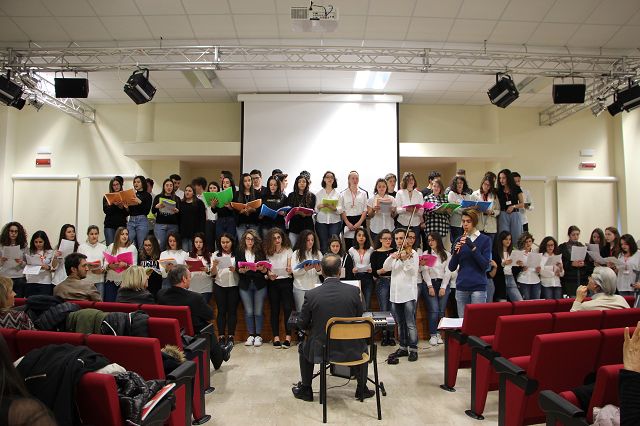 Experience
This week has showed us how different nations can be, therefore how different people and cultures are – in the end we are all just humans, living on earth and sharing a planet.  It was a great experience for every one of us – we don’t regret taking part in such a fantastic intercultural programme.