The 4th cross-student exchange was hosted by IES Joaquín Turina, in Seville, in the region of Andalusia (southern Spain). It took place from 18th to 24th February 2018.

Sunday, 18th February 2018
All participating students and teachers from both invited schools were received by their hosting families at Santa Justa Railway Station (for the Turkish school) and at Sevilla – San Pablo airport (for the Greek school). Afterwards, they all went home to recover some energy after a long trip.

Monday, 19th February 2018
All members of the Erasmus + program arrived early in the morning at IES Joaquín Turina to spend their first day, where some welcome activities were prepared for them. A video of the city of Seville, with music by Joaquín Turina - famous Spanish composer to which our school borrows its name - was shown on screen. Several students from our school played two choreographies and after the performance, all partners from Erasmus + project took part in an ice-breaking activity. They introduced themselves in a relaxed and informal way, so that they could feel at their ease with their partners. After that, all participants could taste a typical Spanish breakfast, consisting of hot drinking chocolate and “churros”, long cylinder of dough, fried in olive oil, with some sugar.

After this break, the presentations of each school participating in this project were shown at the assembly hall. To start, the students from the Spanish team read their PowerPoint presentation, and then, a video by the Turkish group showed an interview to an expert concerning the main topic of the exchange. Then, a video with a short film produced by the Greek team, and related to the subject of racism, was screened. Following these contributions, the works done by our partners from Italy and Austria were exposed. The Italian team sent us a video introducing the subject of the visit, and the Austrian team ended with a video performed by their own students, focusing on the main topic: “The fight against prejudices and racism in Europe”.
Afterwards, the workshop “Sunny: A Journey of Hope”, was held. An immigrant from Nigeria told the students in first person about his long journey and all the mishaps he experienced until reaching his destination, Europe, from his country of origin. Students showed great interest and curiosity and asked him different questions about his difficult experiences and hazardous life.
Erasmus+ students ended their first day at school with a History and Geography classroom immersion. Two videos, particularly related to common prejudices against immigration in Europe, and proving its irrationality, were shown twice at the assembly hall, so that students, divided into eight teams of four participants each one, could answer a multiple-choice test, via the application Kahoot! The winner quartet received a small trophy and a sweet box as a prize.
Finally, once the courses had finished at school, Erasmus + member students and teachers stayed for a welcome lunch, consisting of different entries and a main course, a huge “paella” - this delicious meal is composed of tasty, well-seasoned rice with chicken and/or seafood and other ingredients -, done by the cooking staff. So, all members could enjoy together this first sunny afternoon.

Tuesday, 20th February 2018
This second day, students and teachers arrived again early in the morning to the school, where they departed for a cultural visit to know the city. They visited the main monuments and the city centre, in a guided tour by our English teacher, Mr. David Rodríguez. They spent several hours visiting the Cathedral of Seville (the third largest in the world, after St. Peter, in Rome, and St. Paul, in London) with its tower and ancient minaret, “La Giralda” (from its top they could enjoy a magnificent view of the city), and the Royal Alcazar (former residence of the Royal Family) with its Arabic-style ornamentation and outstanding gardens. Mr. David R. explained our guests about the history and interesting details from these highlights and took them on a promenade across Santa Cruz district, the ancient Jewish Quarter. 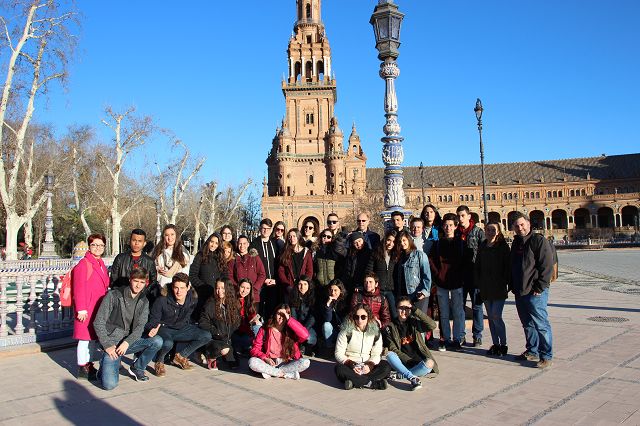 Later in the afternoon, students could enjoy free time with their partners, and teachers continued their visit along the riverside and through “El Arenal” quarter, ancient sandy area next to the river. They discovered also the “Torre del Oro”, a beautiful highlight that reminds about the splendor of the city, especially in the 16th and 17th centuries, when huge amounts of gold and wealth affluxed from the recently discovered lands of America to the city river port.

Wednesday, 21st February 2018
This day began with a classroom immersion, conducted by our Spanish teacher, Mrs. Teresa Rivero, who led an interactive and entertaining activity, in which all Erasmus + partners took part and discussed (in English) about prejudices and racism, once they were shown some photos of Afro American and South American famous sportsmen, concluding that respect and equality are core values, and that racism responded actually, to obscure economic reasons.
At 10 a.m., all members went on a Physical Education external class immersion, on the banks of the Guadalquivir river, accompanied by our deputy director, Mr. Fernando Hidalgo. At the C.E.A.R (a specialized institution which promotes high performance in sports such as rowing or canoeing), students learnt the theoretical fundamentals of canoeing, and began to ride their boats along the river, in an outdoors, sportive and funny activity, that both students and teachers enjoyed to the most, as Prof. Mr. Leonidas Tourlas, from Ilion School from Athens, stated. 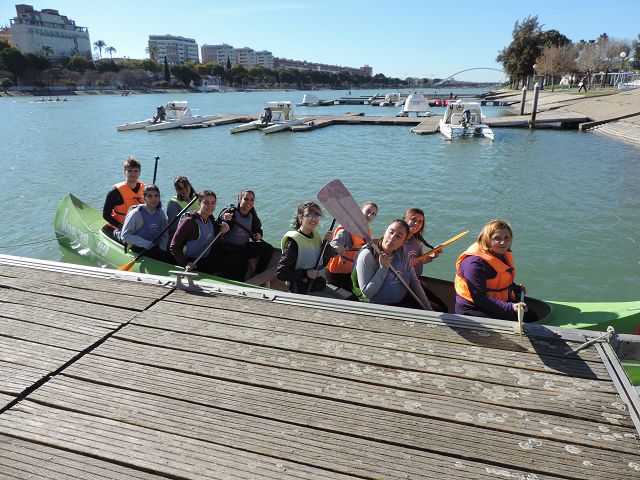 In the afternoon, each member could spend freely the rest of the day, together with their partners.

Thursday, 22nd February 2018
The second part of the cultural visit to our city began early in the morning, with the Geography and History teacher, Mr. Paco Padilla, who guided and our guests and explained some curiosities about the monumental Plaza de España, in Seville. After a long promenade across María Luisa Park, one of the most beautiful and green areas in the city, both students and teachers enjoyed some leisure time having breakfast in this beautiful frame, and after that, students went on riding in a cycling tour within the park roads, enjoying the beautiful views, within this healthy and funny activity. 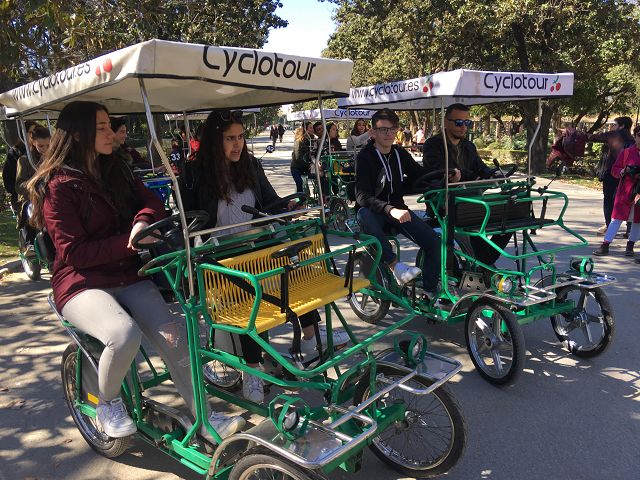 Finally, students were given free time to spend the rest of the day with their partners and new friends. Most teachers joined for lunchtime at a typical restaurant in the particular district of Triana. There, they could taste some exotic dishes, such as bull tail – despite its name, it’s a very tasty meal and both Greek and Turkish teachers were pleasantly surprised by its flavour -. They continued their visit to the town, discovering different spots on this less well-known riverside, such as courtyards, cafés and pottery factories.

Friday, 23rd February 2018
On their last day, all students and teachers from our visiting schools, went, together with our Head of studies, Mr. Paco Ruiz, to three Primary schools in the surrounding area and which are assigned to IES Joaquín Turina. They could diffuse their own experience as Erasmus + partners, so that pupils, as well as teachers from Primary schools, were very interested in the subject. After the speech, they asked different questions that members involved in the project answered with pleasure. It was a nice opportunity for them to speak in English in an authentic context, with people from different countries that, otherwise, wouldn’t have maintained an efficient communication – we will remember that many students living in San Pablo neighbourhood, belong to middle-low social and economic classes and are not used to communicate in English, whether in their own city or by travelling abroad. 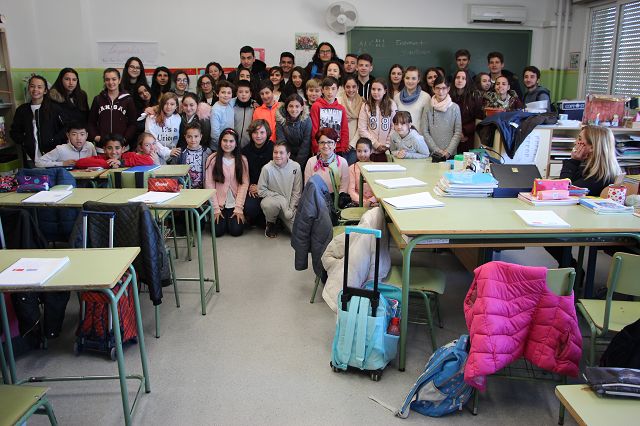 Before this activity, students had already taken part in an English Classroom Immersion, with our English teacher, Mr. David Rodríguez. They discussed topics related to traditional stereotypes and the similarities and differences existing among Spain, Greece and Turkey. After the display of a video, students did a writing production concerning their points of view of different foreign peoples.

Once they returned from the dissemination workshop at Primary schools, students from the three countries attended during the last three hours on Friday morning a Project Work in the Computer room, led by the hosting school headmaster, Mr. Simón Pérez, aiming to prepare the “video of the week”, in which each country group of students created a video as a final outcome summarizing all classes, tours and activities held during the week.